I would like to apologize in advance if I or anyone else in my family acts mean toward you in any way. You see, Lent has just started and everyone in our house has given up either chocolate or all sweets. And judging by the amount of sweets we normally consume in a day, our daily caloric intake has just been cut in half. If you were us you might be a bit cranky too. Yes, Fit for ’14 has finally started. I guess we are going to have to be hungry bitches for a while in order to transform into skinny betches so please be patient with us.

I decided to give up chocolate for Lent. It wasn’t my first choice but since my Dad does the grocery shopping for this old maid shelter we call home I had to give up some sort of sweet by default. Back in my college days I used to give up Facebook which was always a challenge. And since “Sunday’s don’t count” in Lent, I always did what I liked to call “Sunday maintenance” on my Facebook page. This is when I would untag any unflattering pictures of myself, see if anyone wrote on my wall (no one ever did), and check to see if anyone was trying to contact me via Facebook message. Giving up Facebook was socially isolating but giving up chocolate-that’s just plain dangerous for anyone in my family.

It has been a week since Lent started now and our bodies are still in shock. We suffer chronic fatigue, sudden headaches, irritability, and hallucinations from our Lent induced sugar deficiency. Luckily we managed to eat almost all the junk food in the house up until Fat Tuesday. “Gotta get it in before Lent” was our excuse for eating mass amounts of chocolate before Lent started. The week before Ash Wednesday we made “the bear claw” cake for my sister’s birthday. You might be wondering what a “bear claw” cake is. Well you see since we make homemade frosting for our cakes the consistency tends to be a bit runny. Thus, all the frosting runs to the sides of the cake. Well,  my dad had this brilliant idea to cut slits in the cake before placing the frosting on, therefore the liquid-like frosting would fill in the slits in the middle and not all go to the sides. The slits look as if a bear scratched the cake with his claws; therefore the “bear claw” cake was born. This cake is adored in our family. I hard to say this without tears in my eyes, but sadly we were not able to eat the last piece of the cake. On Ash Wednesday there were heated discussions about whether or not one of us should just eat the cake even though we gave it up for Lent. Some argued it would be a sin in itself to waste a delicious piece of cake like that, while others said we could not break our Lenten promises. In the end the biggest fat ass of the family ate it. No, not me, Duke took one for the team and ate it up. But I can assure you that that last piece of bear claw cake will forever be “the one that got away” in all of our hearts. 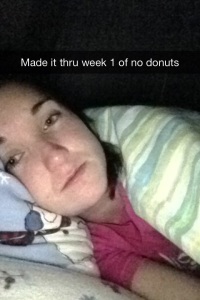 As you can see, not having donuts has physically taken a toll on me. I almost pulled a Mariah Carey and checked myself into the hospital for extreme exhaustion. 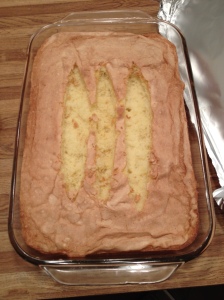 The Bear Claw cake before the frosting is poured on.

Every night when we sit down for dinner someone shares with the rest of the family some sort of horror story about how they were at a work conference or a party where there were desserts available that they could not have. The person telling the story then goes into intricate detail about the sweets while others at the table ask questions. If it was cookies, we want to know how many chocolate chips were in each cookie, if brownies were involved, the fudgy-ness of the brownie is described, and if it was cake everyone needs to know what type of cake (Chocolate, vanilla, Fun-Fetti, Red velvet, etc.) and what type of frosting was applied on top (butter cream, whipped frosting, etc.). The stories told of desserts at the table do provide a nice variation from the 2 things we normally talk about at dinner-Duke and the neighbors. Now I hate to admit it but sometimes we use our own nicknames when talking about the neighbors. This is either because we don’t know their names or because we have determined that the nickname we came up with is more fitting than the person’s given name. Here is an actual dinner conversation that took place last month:

Me: There were about 5 police cars outside Brawny Paper Towel Man’s house earlier today.

Me: You know the guy a couple house down from us, I think he lives with his brother.

Dad: Oh the one that lives across the street from Mr. and Mrs. UNFRIEDNLY? I don’t know what is with those mopes but every time I say hello they just ignore me.

Mom: Oh I know who you’re talking about now but you are giving him way too much credit, the real Brawny Paper towel guy is MUCH better looking than the man a couple doors down. Mike honey remember it was his brother, the Abominable Snowman, that we saw at the barbecue last summer.

Dad: Oh that was him? He was an odd fellow.

It’s embarrassing but my family is just not good with names. I think my father passed down this gene to us. He can’t even remember the names of his own kids. “Bridget would you-I mean Maggie, I mean Jane, oh Hells bells, whatever the Hell your name is would you hand me the scissors?” “My name is Kathleen Dad, and here are the scissors.” So far he has not gotten me confused with Duke yet so I consider myself lucky.

We Kelly’s have a long Lenten road ahead of us. There may be some slip-ups on the whole no eating sweets thing but Jesus fell three times right? Just gotta get right back up again.

One thought on “Is Lent Over Yet?”