I like to think I inherited my strikingly good looks from my mother, and my weirdness from my father (Let’s all just say a prayer that I didn’t inherit my Father’s hairline too). My Dad is a goofball, always making corny jokes, acting like a child, and just overall being strange. He taught us from a young age not to be overly sensitive and to take what life throws at you.
I still remember when I was little, maybe about 5 or 6, I decided to draw a picture for my Dad that he could hang up in his office. I spent quite a long time on this beautiful picture (Some called me a young Picasso back then) trying my best to make it look nice with those impractical waxy things they call crayons (I have since graduated to colored pencils). Once my masterpiece was done, I very excitedly gave it to my dad. “Oh this is lovely” He said. I felt proud and couldn’t help but blush. Then he added, “I think I’ll hang it on the inside of the garbage can.” And with that he started roaring with laughter, while I just stood there in a state of disbelief. This type of fatherly behavior goes against what any child psychology class will teach you and probably delayed my emotional and psychological development for quite some time. It’s ok though because I am convinced that as a child I didn’t have a soul, so it probably didn’t really phase me too much. Here is a picture to prove it:

There I am, second from the left, with the empty eyes. There was nothing going on in my little head because I had no soul.

In addition to teaching us not to be overly sensitive, My Dad has taught us many other things. One example is the importance of recycling. You can’t even throw a post-it note in the trash without my dad sniffing it out. “Who is the dimwit that threw this in here?! This can be recycled in the paper recycling bin!” I’m all about going green but he takes it to the extreme. I think his favorite part about Christmas is collecting the wrapping paper after all the gifts are opened and bringing them to the paper recycling center.
Another thing he has taught us-“Sing as if no one can hear you.” Sorry dad, but when you sing, we can actually hear you. My Dad sings and hums while doing dishes, ironing his clothes, doing laundry, and ALWAYS when he walks up the basement stairs. His favorite basement stairs song to sing is “1-2 buckle my shoe. 3-4 shut the door…” But sometimes he’ll make up his own. A couple of weeks ago, on a particularly hot day, he was walking through the basement and started singing “Nice, and cool, nice and coooolllll, nice and cool” to a made up tune of his own. One of these days we have to get him into a recording studio so he can release an album.
He is still trying to teach us a few things though, like how to keep the fridge “organized.” “Who the hell put the butter on the second shelf?! Everyone knows it goes on the first shelf. No wonder I can never find anything in this fridge you kids just shove food on any shelf in the fridge!” Like most normal people, we put food back in the fridge where ever it will fit, but apparently my dad has an order for everything that he likes to keep secret.
So in appreciation of our Father and all the things he has taught us, a couple of weeks ago, like most Americans, our family celebrated father’s day. My Dad is a simple guy but he’s hard to buy for. Many times whatever we give him he ends up returning to the store. It’s almost as if the moment he opens the gift he is searching for the receipt. Sometimes I consider just putting the receipt to whatever we bought for him in a box and wrapping that up for him to open. That’s usually what he looks for anyway.  But this year we tried to save him some time standing in the return line by getting him gift cards and the very specific train books he asked for. My Dad is obsessed with trains. Anyone who goes in our basement probably thinks they are at a railway museum with the amount of train pictures we have hanging on the wall. In addition to trains he loves construction equipment and trucks. As you can tell my mom married a real man’s man. My dad tries to share his interests with his children by talking about trains and trucks. These conversations are short-lived. His favorite truck is the peterbilt which I believe is the nerd of the truck world. This makes conversation on car rides quite interesting.
Dad: “Kathleen look at that Peterbilt to your right. Isn’t that a great looking truck?!”
Me: “NEEERRRRDDDDD. It’s probably going to drop off a load of books at the library. Classic nerd.”
And now that my Dad has finally caught up with the 21st century, gotten rid of his God awful Blackberry, and learned how to text, these truck conversations have extended to text conversations:

As you can see, we have very meaningful conversations

In my family, we kids are lucky. We have a relationship with our Dad that is much like a friendship. We joke around, make fun of each other, call each other dimwits, idiots, and morons, but all in a fun manner. No one in our family is afraid to speak their mind. Especially when it comes to outfits and appearances.
Me: “Dad, what is with the collar of your shirt?! You look like a pilgrim! We are going to a graduation party not a reenactment of the first Thanksgiving.” Unbutton your top button.”
Dad: (huff) “Oh what do you want me to go practically undressed with half my shirt unbuttoned showing my chest hair like some ganster?!”
Me: “Believe me, no one wants to see your chest hair. I’m just suggesting you unbutton ONE button so you look like less of a dork.”
Don’t feel bad for my dad though, he gives it right back.
Me: “Ok bye Dad I’m going out.”
Dad: “You’re going out in those little slipper shoe things? You practically have nothing on your feet! You’ll probably get frost bite!”
Me: “They are called flats, and I will be fine.”
Dad: “Ok but don’t say I didn’t warn you. Did you make sure the clapper is off? It’s a miracle you girls haven’t set the house on fire with all your foo-foo hair gadgets!”
Me: “Yes Dad, ‘the clapper’, which is actually called a hair straightener, is off and unplugged. It will not start a fire.”
I feel very fortunate to have such a caring and helpful Father that puts up with four daughters and a son. Who do we call when we need financial advice? Dad. Who do we go to when we need all the hair cleaned out of the shower drain because it’s clogged? Dad. Who do we ask permission from to change the temperature on the thermostat? Trick question. You don’t EVER, EVER touch that thermostat. EVER.
Our dad is more than a dad. He is a handyman, plumber, comedian, and a friend. He makes his five kid’s lives interesting and fun. We couldn’t ask for a better roommate! So thanks Dad for all that you do!

A few weeks ago my family went on vacation to California. This trip was about seven years in the making, I almost didn’t believe it would actually happen. But with two siblings engaged, we were under a time crunch to get one final family vacation in before the weddings. My Mom and Dad kept referring to the trip as “our last family vacation” but we kept reminding them that it really should be called “our second family vacation” since the last time we took a real family trip was when we went to Disney World pre Y2K. I don’t blame my parents for the long gap in vacations seeing as when they asked us after Disney World what our favorite part of the trip was half of us responded by saying “The pool at the hotel.” Little did my parents know they could save themselves a few grand and just take us to a public pool for a few days and we would be happy. 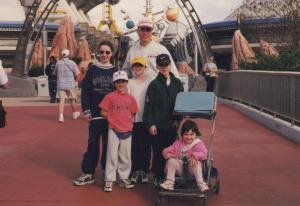 Is that John Lennon? Oh no that’s just my sister with sunglasses on. And that little girl ( or boy? Can’t tell with the bowl cut) is way too big to be in a stroller.