When it comes to exercising, I get an A for good intentions and an F for follow through. I have made several attempts to work out regularly and eat healthy, but it just hasn’t worked. I know eating right and exercising are important for your health, every doctor makes a point of reminding me at every appointment. Do you smoke? No. Do you drink? Only when I’m thirsty. Do you exercise regularly? Umm I’m sorry, I did not come here to be judged. Now just leave me to wait in the waiting room for three hours only to have you meet with me for 5 minutes to take my height and weight and I’ll be on my merry way thank you very much.

The importance of exercise was instilled in me from a very young age. I recently stumbled upon a “To Do” list I had made when I was about 7 years old. The things on the list had all sorts of different types of exercise I needed to do including swimming, riding my bike, and taking the dog for a walk. Man that must have been a stressful week for me, I had so much on my plate.

I think my father’s greatest fear was to have one of his five children become obese. He did not want to get us a Power Wheel because he thought if he did we would stop riding our bikes and become fat. Despite knowing this, I asked for a Power Wheel every Christmas in the hopes that maybe Santa would feel for me and bring me one. Santa is fat I’m sure he drives everywhere, I can’t really see him riding a bike at all. I finally gave up on this dream around last year and removed “Power Wheel” from my Christmas list. I heard the battery life was terrible on those things anyway. 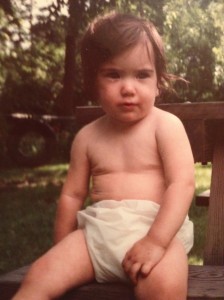 Woof. I can see why my father was worried. Look at that beer belly action I had going on back in the early 90s. My posture needed some work too.

In the past year, I have had about 3 failed attempts in getting into shape. The first was my short stint I had belonging to a gym. I asked for a gym membership for Christmas and received it. Sure, Santa won’t bring a Power Wheel but he won’t hesitate to get you a gym membership. Looking back now I don’t know why I asked for it. I would have been better off if I asked for a lump of coal. The whole gym membership thing lasted for about 2 months. When I went in to cancel my membership the guy behind the counter gave me grief about it and tried to guilt me in to staying a gym member. Yeah, like that was going to work. Like excuse me sir, I am the queen of guilt tripping people. You cannot beat me at my own game. I signed that cancellation form and never looked back.

The second attempt was signing up for a boot camp class. I had found a Groupon for a boot camp class not too far from my house, 12 classes for $30 dollars. What a steal! And you had over six months to use the Groupon. I thought this was great and even convinced 2 of my sisters to do it with me. After completing the first class we were really excited to start going to these classes and getting into shape, we even discussed buying a second Groupon to continue after we completed the 12 classes. Well, that must have been the endorphin’s that are released after exercise talking because long story short we attended 2 of the 12 classes. I believe this boot camp method didn’t work for 2 reasons. One, it was the middle of February and thus very cold. Have you tried leaving your warm house in the winter to attend a work out class? It’s nearly impossible. And two, you had to sign up for the class 24 hours in advanced! I can’t make that sort of commitment! What if I signed up for a Saturday morning class and then decided I wanted to go out after work on Friday and stay out until 2 or 3 in the morning? Not going to work.

My third attempt was trying to do the Insanity work out videos. For those of you who have not heard of this work out video, it lives up to it’s name. Only insane people would do it. The work out is about a 2 month program which I shockingly stuck with for around 3 weeks. The issue with this was the time commitment. Each video is about 45 minutes and you are supposed to do it 6 days a week. I started out doing it right when I got home from work, before dinner because I knew I would be too full to do all that jumping around after dinner. The problem with this was that I would usually get home from work at 6pm and we eat dinner at about 6:45. While the work out video itself was only 45 minutes, you have to factor in time for getting changed into work out clothes, putting the DVD in, tying my shoes, commuting up the stairs to the kitchen, etc. With all this time adding up, I was arriving at the dinner table about 4-6 minutes late every night. No one enjoys a cold dinner so I knew I had to make a sacrifice somewhere, so I chose to sacrifice doing the work out video.

After all my failed attempts I had come to the conclusion that I either had to choose working and making money, or working out and looking good. I cannot do both, I’m no super hero. While it would be nice to be able to make my own hours if I chose working out, I realized money is kind of an important thing to have so ultimately I decided to hold on to my job. But it’s not like I have cut out exercising all together, sometimes we run out of ice cream in our first floor freezer and I have to walk all the way down to the basement freezer to get another carton. Walking up and down all those stairs is a great leg work out. I’m usually out of breath by the time I make it back up to the kitchen. I realize I will never look like a super model but oh well, if I ever get sad I will just go drown my sorrows in a cheeseburger.