Since I work at a high school, this past week I was able to enjoy a Spring break, and what an adventure it has been! No, I didn’t travel anywhere, but why would I when I live in Evergreen Park, the “village of churches,” the vacation destination of America!

For the first part of my spring break my sister Jane was home from college, which was nice for me because I had a buddy to explore the Land of Lincoln with. Our adventures began with a Good Friday bike ride since it was a beautiful day. We needed to fuel our bodies before our big biking excursion so we were eating some snacks in the kitchen when Debbie Downer-I mean, my mom-came in and said “You know girls, you are really supposed to be fasting since it’s Good Friday.” “Oh my gosh, Mom!” I quickly replied. “Why do you always have to fat shame us?! We’re just really hungry from going out last night, we need to eat! Plus, I get headaches when I don’t eat for a while so I think I’m exempt from the whole fasting thing.” “Well I am going to fast!” my Dad chimed in. “I don’t want to get to the gates of heaven only to have St. Peter say ‘Wait a minute, Mike, it says here that you didn’t fast on Good Friday 2017. We can’t let you in just yet.'” “Well, I am really not worried about that.” I replied “I work for a Catholic school, that’s basically a one way ticket to heaven. The rest of you guys will probably have to make a pit stop in Purgatory, but I can cut the line and get right in.”

After a detailed discussion about Purgatory versus Limbo, Jane and I hit the open road on our 12 speed bikes. Bike rides are fun until you ride for about ten minutes and then your butt starts to hurt. “Jane, give me the gel seat off your bike, my bum bum is killing me!” I yelled while I was frantically peddling trying to keep up with her. “I need yours to go on any further.” “Don’t you already have a gel seat on your bike?” She said. “Ugh yes, but I need yours for extra cushion. You know I’m like the princess and the pea, I can really feel all these bumps we are hitting.” But being a typical selfish youngest child, she didn’t give me hers so we had to stop at my sister’s house to rest and also make her feed us lunch since my mom was keeping tabs on our calorie intake, making sure we were fasting on Good Friday.

I age backwards about ten years when I wear a hat

The next day I celebrated Holy Saturday with my friends on the north side of Chicago. I made sure I was back Sunday morning though for Easter mass with my family. Then on the way home from mass, like any normal Catholics, we ripped the mass apart.

Bridget: Ugh did you hear that super annoying baby behind us? I was like take the kid outside, his screams were literally piercing my ear drums.
Mom: I thought the homily was a little long. I wish there was someone to get the hook out when these priests go on and on. It’s a power thing, really, making everyone listen to them for that long.
Me: I HATE when instead of just speaking the priest has to sing everything like it’s their own Broadway musical. No one wants to hear you sing, leave that up to the choir.
Jane: At least the choir sounded better than they did at last year’s Easter mass.
Me: Oh, I wouldn’t know, remember I was in Ireland last year over Easter? I’m so cultured.
Bridget: Yeah, we know. I think you described that trip saying ‘there wasn’t a single minute you weren’t having fun?’

I think we can all agree Easter is a very dull holiday. You go to church, get your Easter baskets and that is about it. Pretty boring. After mass we didn’t do much but eat ham and lounge.

On Monday Jane left to go back to school so I thought this was a perfect time to paint my bedroom. Jane and I used to share a room but she finally moved out into my brother’s old room down the hall. My parents painted it for her and even got new carpeting for her room so my room was looking a little shabby. Plus, now that I am a sophisticated old maid of 26, I thought it was time to get rid of the Pottery Barn Teen decor that was in my room for the past 15 years. I must admit though, I did feel a little guilty getting rid of that Pottery Barn Teen stuff. I mean it was a big deal at the time when we got it, only rich families ordered stuff for their children from Pottery Barn Teen. I really don’t even know how the catalog arrived at our house. I remember I begged my mom to order a comforter from there for our bedroom. She finally agreed but basically threatened that this was the last comforter she would ever buy for us since they were probably going to have to take out a second mortgage on the house to buy items from the extremely overpriced Pottery Barn Teen. The way she was instilling fear in me I thought I was going to have to use that comforter on my death bed.

While painting seemed like a great idea, in reality it was awful. Do you know how to spell regret? P-A-I-N-T-I-N-G. I forgot how exhausting all the prep for painting was. Taping, rolling, using a brush in the hard to reach areas of the wall. I was actually sore from painting my room. It was almost as bad as having to make those Christmas cookies on Christmas Eve. And, I did everything by myself. Sure, when it was time to paint Jane’s room my parents practically had Ty Pennington and the Extreme Makeover: Home Edition crew there to help, but when it came time to paint mine everyone was “busy.”
“Dad” I said “When are we getting the new carpet installed for my room?” He replied, “When you say WE, it makes it sound like Mom and I are paying for it.” “Well yeah.” I said “You paid for Jane’s. And plus, if I billed you for all the in-house IT service I provide you and Mom on a daily basis, you would owe me much more than some carpet.” (My Father just got a new laptop from work so I’m sure you can only imagine how swamped I’ve been lately) It can be a little awkward when you father is also your landlord, but I know how to negotiate so I usually end up getting what I want. The tenant is always right.

Unfortunately, the subject of me painting my room reminded my father of how years ago my sister and I put up glow in the dark stars on our bedroom ceiling so he went off on a tangent about that and how the glue ruined the dry wall. It was something my sister and I did 15 years ago, but to my Dad, it feels like yesterday. For him the pain is still there. I think he might have removed us from his will after we put those stars up. I tried to calm him down, letting him know that I had no plans to paint the ceiling, those stars are the next owners of our house’s problem. But he still got pretty worked up.

After a few days of painting, I needed a break so I went downtown with some friends. It was great, we were like tourists in our own city! As the day turned into night, and we stayed out a little later than planned, I decided it was time to go home. But, to my dismay, my parents had “accidentally” locked me out of the house. When I couldn’t get in I initially panicked thinking to myself, “Have I been evicted?!” I quickly ran to the other side of the house to see if there was a pile of my belongs outside. To my relief, there was not. After a while I was finally able to get into the basement, but I was still locked out of the rest of the house so I ended up sleeping on the basement couch. I think it was my father’s way of getting back at me for those glow in the dark stars.

This snap chat was a great conversation starter.

Don’t be fooled by the kissy face emoji. Mo is savage, she’ll lock you out.

I was expecting a donut the next morning as a peace offering but instead got a cookie. I still accepted.

The next night my Father made up for it by giving me a ride home from the bar, ensuring I was not locked out. My dad and I tend to be on opposite schedules on the weekends, which actually works out nicely for me. He gets up very early so many times he is getting up for the day while I am just getting home. So he texted me and happily agreed to pick me up and drive me home. I mean why call for an Uber when you can ride in Dad’s taxi for free?!

Mike Sr. was chipper and ready to begin his day! Best roommate ever!

Other than those adventures, my spring break was pretty low-key. I went out a lot, went to Target a few times (splurged and treated myself to a wireless mouse, great purchase) and annoyed Duke a WHOLE LOT. While I was loving being off for an entire week I think it’s safe to say that all my roommates are very glad that I will be going back to work. Can’t wait for Spring Break 2018! 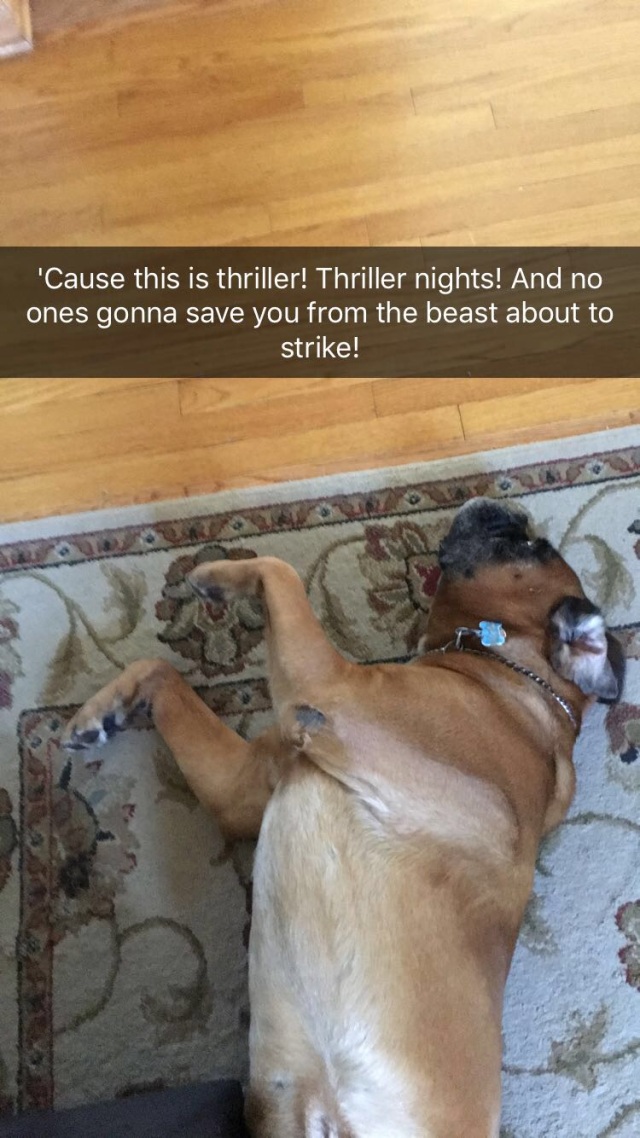 Annoying Duke while he tries to do his morning stretches.