Last week, I traveled to Boston with my sister Bridget, my cousin Meghan and my selfie stick. It was kind of a spontaneous trip, we only decided a couple of weeks prior that we should all go to Boston together. The three of us are all middle children, so we figured we should treat ourselves to this trip, since no one else is going to treat us to anything, everyone knows that no one loves middle children.
The night before we left for our trip I was up later than I had originally planned because I was having a lot of trouble packing and figuring out my outfits. Of course I needed to be prepared for anything, “going-out” outfits, “being tourists during the day” outfits, “I’m just a sporty twenty something exploring a big city” outfits, etc. My mind was racing and I was stressed out! Then, once I was finally done packing and about to climb into bed for a good night’s rest I see a spider crawling across my bedroom floor! I was livid that this spider had the nerve to crawl across the plush carpeting that my landlords/parents had just installed! I don’t know if this spider thought I was renting out my place as an Airbnb while I was away in Boston or something, but he was sorely mistaken. But in the spider’s defense, it is something I’ve thought about, I’m sure I could rent it for a pretty penny. I mean, how appealing does this sound:

“Calming studio apartment located on the second floor of a building my parents own, in the heart of Evergreen Park, ‘the village of churches.’ Sleep soundly on a luxurious twin bed from Darvin furniture, complete with Pottery Barn Teen comforter. Amenities include an AC unit, TV and possibly a mini fridge pending landlord approval. Must be comfortable with pets and Baby Boomers. Must also be willing to help said Baby Boomers in the event they have an issue with their phone, TV, laptop, or any other technology related device. Landlord may get you a doughnut in the morning though if you are polite. Message Kathleen if interested.”

Yea, I think it’s safe to say the spider was on to something, my place would rent out like crazy. 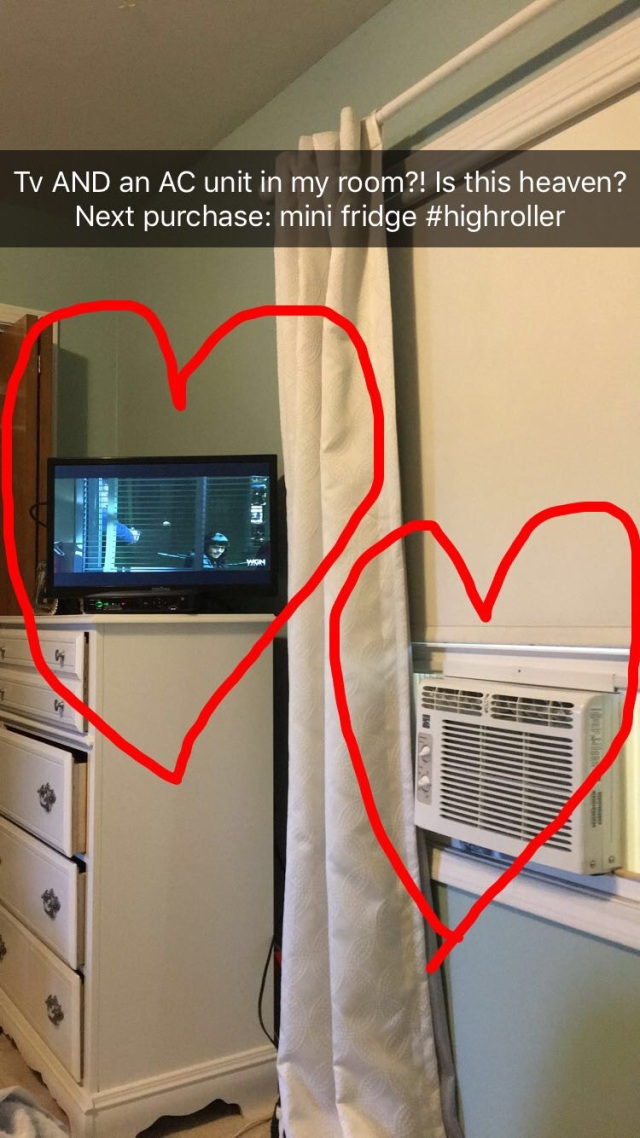 This is the photo I would use that would make my place rent out like crazy. Please ignore the violence going on on the TV, I was enjoying a Law and Order SVU marathon.

After tossing and turning all night because I felt so itchy from the spider incident, it was finally time for Meghan and me to head to the airport (Bridget was already in Boston for work, being a business woman on a business trip). Our friend Laura was nice enough to drive us to the airport and while on our way she asked us what we were most looking forward to about our Boston trip. “I can’t wait for all the inside jokes we are going to have after this trip!” I responded. “Hopefully we’ll come up with some good hashtags for Instagram!” I mean, who doesn’t love a good inside joke and hashtag?! #MiddlesDoBoston

Once we got to the airport and through security we had a quick drink at the airport bar and then went to our gate to board. We seemed to be waiting to board for quite a while though, so I decided to pass the time by talking about movies. Usually I would have brought up some new celebrity gossip, but I had been so busy in the days leading up to our trip that I had no time to watch Inside Edition so I had zero gossip! “Have you ever seen the movie Sully?” I asked Meghan. “That was a good movie. I mean how crazy is it that you hit a flock of birds and then it takes out both engines and before you know it the plane is going down! Can you imagine being a passenger on that plane?!” Meghan looked at me like I was crazy. “Why would you talk about THAT movie right as we are about to get on an air plane?!” She responded. “And yes, I have seen it!” Whoops, my bad.
The flight there was pretty uneventful, other than a lot of turbulence due to rain. I was fine and kept busy by reading my People magazine, but Meghan did not look like she was having fun. Apparently she kept thinking about that movie or something.

After a bumpy ride we landed in Boston and headed right to the bathroom because we drank way too much water. I was at the sink going to dry my hands when I realized there were no paper towels, only hand dryers! “That’s strike one, Boston!” I thought. Everyone knows my pet peeve is when bathrooms only have hand dryers and no paper towels. If I want  to ruin the environment with paper towels that’s my right, my prerogative! Don’t force me to be eco-friendly with your fancy hand dryers that only partially dry my hands. So with our hands still dripping with water, we then headed to the apartment we had rented for the weekend. Bridget had already checked in for us and was anxiously waiting our arrival (She was quick to switch from a business woman on a business trip to a business woman on a leisure trip). The place was nice but no one could get any cell service in the apartment. Bridget and Meghan were a little annoyed with this but it was not a problem for me since I do not ever really get text messages, other than the occasional roommate texting me asking if the dishes in the dishwasher are clean or dirty, or if I know the password to her Yahoo email. Our only other complaint besides the cell service was there was no microwave! How would we heat up our food?! Sure, there was an oven but who uses those things anymore?! After getting over THAT shock we quickly got ready and then went to dinner and a few bars near Fenway Park. I was a little disappointed because I wore a super cute outfit and looked like a bombshell babe, but no one took any pictures or posted anything on social media so it was a total waste. Other than that it was a fun night. The next day we woke up and did a ton of tourist activities including the Freedom Trail, which took us to a lot of historical landmarks in Boston. Some were interesting but others were wicked boring. (Notice how I used the word “wicked?” Only a few days in Boston and I’m already picking up the lingo!) One stop was a very old cemetery where Paul Revere was buried. All the tombstones were from the 1700s and everyone seemed to have died pretty young. I saw one headstone of a woman who died when she was 26-the same age as me! But here’s the real kicker-she had already been married! She died a lucky woman, that is for sure. Just as I was beginning to feel bad about the fact that I was still an old maid at 26, I spotted across the street probably the nicest Walgreens I had ever seen in my life. Apparently it was not part of the Freedom Trail but we stopped in anyway and we were NOT disappointed. Crown molding throughout, shiny floors, plenty of snacks and beverages, was I in heaven. After a quick stop at Walgreens we headed to the bars again to have a much needed drink after all that walking. Super lame tea party-there were no Twisted Teas, not even Brisk brand iced tea! Not worth the stop.

Saturday was a bit more of a leisure day. We went to a roof top bar where I sustained some sunburn on my scalp and my sister suffered severe burns on her chest and back (pale kid problems). Then we rode the train, or as the locals call “The Chaaaaaarlie” (you have to say it in a Boston accent) to meet up with our other cousin, Cara. Thank goodness Bridget was our city girl and helped Meghan and me navigate through public transportation in a big city! If it was up to us we would have taken Ubers everywhere. We didn’t know any better though, we were just a bunch of Southside Bumpkins in the big city!

Sunday we had just enough time to go to brunch (Since we are basic white girls/Millennials) and then it was time to go to the airport. It was my first time flying United so I was pretty excited. Let me tell you, it’s a good thing they make coach passengers walk past the first class passengers on the way to their seats or I might have forgotten how middle class I am! So kind of them! But that wasn’t the only perk United provided, there was a little dog on my flight! And he looked thrilled to be flying United as well.

The flight back was fine until it was time to get off the plane, where I experienced my second pet peeve: when people don’t wait their turn to get off the plane. Do people not have manners anymore? Exiting a plane is just like getting communion at a Catholic church. There is an order, you wait for the row in front of you to go before you do! And if you cut the line people will talk about you and give you dirty looks. I don’t get what people don’t understand about this! Once we were finally off the plane and in the airport we were immediately reminded that we were middle children as no one was there to greet us or give us a ride home. Yes, the vacation was over and we were back to reality. We all called Ubers and headed our separate ways. 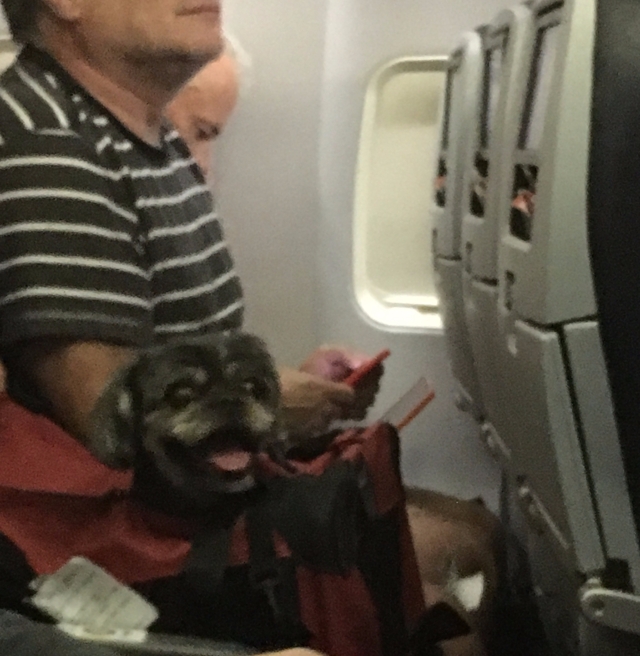 This young man was a true gentleman and waited his turn to get off the plane. Proof that chivalry is not dead.

We were exhausted when we arrived home but it was a great trip. We even discussed plans for our next trip! Watch out 2018, because the Middles are going international! 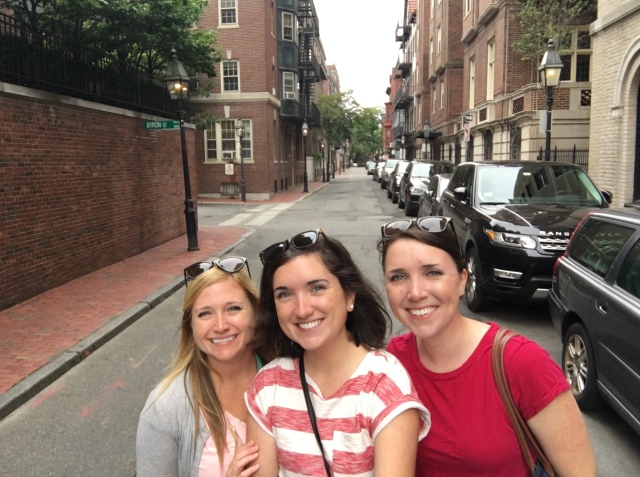 Brick sidewalks and cute streets are so Boston.