About a month ago, I finally fulfilled my life’s prophecy-I became not only an aunt but a Godmother. I was absolutely thrilled but I also thought, “Sheesh, it’s about time someone asked me to Godmother their child!” I mean, I feel like I am a pretty holy person since I went to a catholic grade school, high school and college, AND now I work for a Catholic school. Heck, I even LOOK like Jesus himself when I let my hair air dry after I shower: 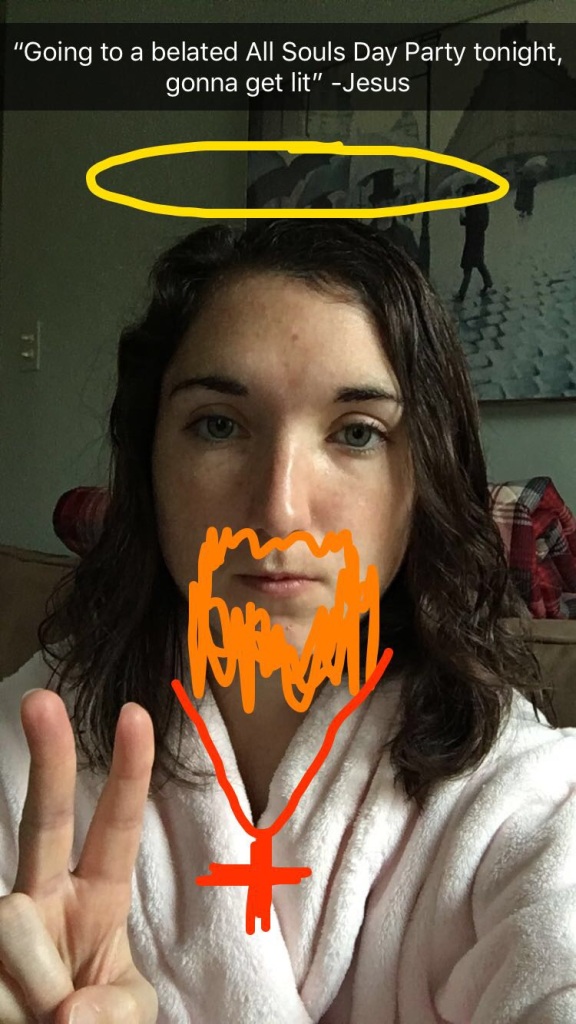 Might spend some time in Purgatory for this snap but it was worth it.

With all these credentials it’s really hard to hide my halo. Plus, I had been campaigning for Godmother ever since last December. It was a long and tiring campaign, but I won in the end. Sit tight and I will tell you my success story:

My journey to Godmotherhood began on Christmas morning 2016, when my oldest sister Maggie and her husband announced to the family that they were expecting a baby in July. The five of us kids had just given our parents their gifts when Maggie suddenly said that she and her husband had ‘one more gift for Mom and Dad.’ My two other old maid sisters and I were sitting on the couch and we immediately exchanged dirty looks.  We never said anything out loud but in our heads we were all thinking “Look at this brown-noser, giving Mom and Dad another gift! Here the five of us decided to collectively give Mom and Dad gifts and she goes and makes us look bad by bringing an EXTRA gift just from her and her husband?!” Our mood changed when my parents opened the gift to discover they had a grandchild on the way. I was very happy for Maggie but also thought she was being a little selfish. I mean here we were trying to celebrate the birth of Jesus and she had to go steal the spotlight from Mary?! Rude.

About a month later, before we even fully processed this new addition coming to our family, my brother Michael announced that he and his wife were expecting twins! Classic sibling rivalry always trying to one-up the other sibling. Michael really made Maggie look lazy on this one. One baby, really Maggie? That’s it? I guess not everyone in a family can get that strong work ethic gene. (When it comes time for me to have children in 15-20 years I’m shooting for triplets just to out-do everyone).

The whole family was shocked but thrilled. We were suddenly going from zero grandkids to three grandkids! In the Kelly family it seems that my sister Maggie and brother Michael to like to do things around the same time. They both got engaged about a month apart from each other, then they got married only four months apart, and now they were starting to have kids around the same time. That’s nice that they are able to bring my parents such joy with their life events. God knows my two other sisters and I aren’t going to be accomplishing those things anytime soon. In fact, I often wonder what my parents say about me when their friends ask about their kids. I imagine it’s something like this:

Friend: “So Mo, how are all your kids doing?”
My Mom: “Oh yea everyone is doing great! Maggie and her husband have a baby boy, Michael and his wife just had twin girls, Bridget has an apartment in the city and is a manager at her company, and Jane is teaching abroad in Prague for a year! Oh and Kathleen… yea she’s doing well…still living at home with us…not too much new with her…[*Here my mom racks brain trying to think of accomplishment*] she dressed up as a bag of dog food for Halloween so yea, we’re really proud of her and not worried AT ALL that she’ll never marry. We are so proud of ALL our children.”

Still my greatest accomplishment in life. Duke and I killed it with our couples’ costume. No regrets.

While everyone was happy that we had three babies on the way, no one was quite as ecstatic as my mom. She would have sent out a press release and announced on national television that she had three grandchildren on the way if she could have. I also noticed that she began acting different-regularly attending yoga and Pilates classes at the local gym, which she never did before. “Going to POW! (People on Weights) Sorry I didn’t have time to make anything for dinner but I think there’s someone’s leftovers from something in there I’m sure you could eat!” she’d say, as she walked out the door in her yoga pants and sporty fleece, water bottle in hand. Who was this “I’m a gym membership Mom who regularly attends classes” gal? I thought to myself. The Mom I remembered was strictly a “pop in a Jane Fonda’s New Workout VHS and exercise in the basement a few times a month” kind of gal.  At first I thought this was just her way of trying to get out of cooking dinners, as these classes just so happened to be around dinner time, but then I realized it was all for the babies. “Are you trying to be one of those sporty Grandmas Mom?” I finally asked one day as Sporty Spice-I mean, my Mom-was headed out the door. “I have to build up my strength if I want to be lifting up my grandbabies!” She replied with a big smile and a wink.

My Dad, on the other hand, could not have been more opposite of my Mom in his excitement about his grandchildren. He was very happy of course, he’s just never been a man to show much emotion. His response to his children telling him they were expecting was much like a response you’d get when you told someone you had chicken for dinner. “Ah, very good” was my father’s big reaction to the news. We all though this was hilarious of course and we talked about it recently at a family dinner a few weeks ago:

Dad: [Said defensively] “Well what the Hell did you want me to do, start jumping up and down and doing cartwheels?! I was happy for them but it’s not like I didn’t know it was coming! Most people get married and then they have kids! It’s not like it was a huge shock!”
Me: “Dad, you show more excitement when your subscription of TRAINS Magazine comes in the mail than you did when you found out you were going to be a grandpa!
Dad: “Well that’s different! I don’t know WHEN TRAINS magazine is going to come so it’s exciting!”
Me: “IT’S A MONTHLY SUBSCRIPTION, IT COMES EVERY MONTH!”

At this point everyone was laughing hysterically. I think then my dad realized how ridiculous he sounded, but still wanted to stand his ground.

Dad: “Yes, but I don’t know WHAT DAY of the Month TRAINS Magazine will come OR what will be in it, which is very exciting.”

What can I say? The man loves his trains.

It’s crazy how fast nine months goes by when you are not the one pregnant. I’m not sure how fast time went by for my pregnancy pact friends, but before I knew it, all three babies had arrived, 2 days apart from each other. On July 31st we welcomed baby Michael and two days later on August 2nd twins Abby and Ava arrived. By August 3rd, I realized that my Mother’s five children were old news to her. She was a grandma now and her grandbabies came first-her five kids were now sloppy seconds. 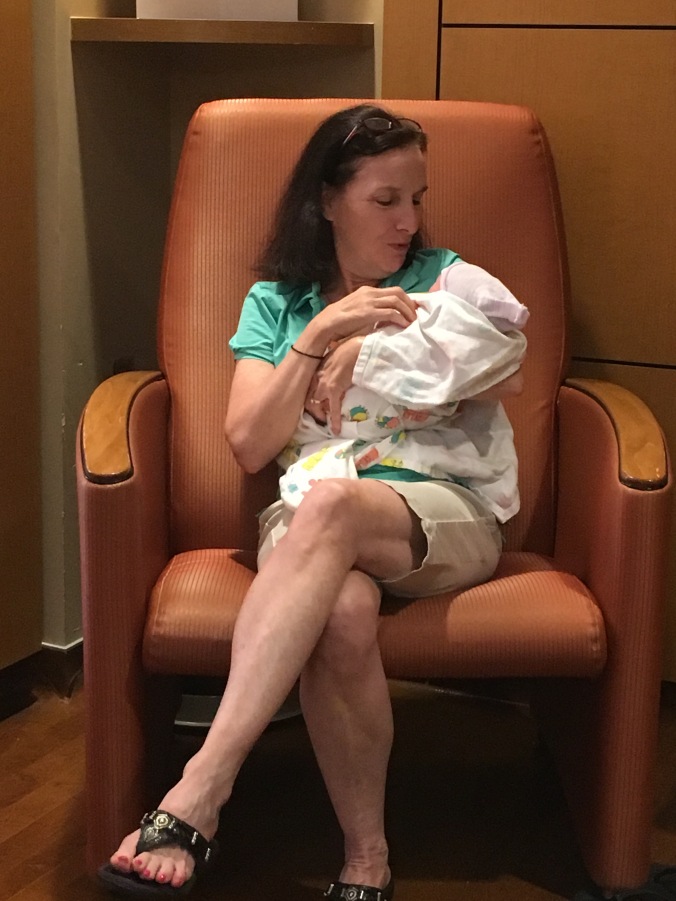 I remember when my mom used to look at me like that. It was nice having my Mom for 26 years but the babies have her now. I am old news. I had a good run though.

Once our family adjusted to life with three babies one very important question remained on everyone’s minds-Who will the Godparents be?! Since CLEARLY my parents were both emotionally unstable to handle being Godparents, as we saw through their actions after first hearing the joyous news that babies were on the way, I knew they were no competition in getting in my way of becoming Godmother. Jane left the country to teach in Prague so I knew she wasn’t even a contender but I did have my other siblings to compete with. As the weeks went by and no one had yet been asked to be a Godparent, we all began to worry that maybe no one would be a Godparent! Finally, about a week before the baptism, my brother asked me to be the Godmother of his daughter Ava. He really waited till the last-minute to ask me but I still gladly accepted and immediately began searching for the perfect Godmother outfit to wear to the baptism. Something that said “I’m not a regular Godmom, I’m a cool Godmom.”

Me and my Godchild, Ava. Went with a sweater dress from Macy’s, I felt it just screamed “I’m a Godmom.”

The whole family minus Prague Jane after the triple baptism. It was a little embarrassing that the babies wore white after Labor Day but they pulled it off.

While it can be difficult being a single (God)Parent AND working full-time, it’s very rewarding. Those babies are so darn cute, you can’t help but be happy around them. I used to reach for a drink after a rough day but now I just reach for a baby. I finally have someone to pass down all my prized possessions (AC unit, selfie stick and autographed photo of Inside Edition host Deborah Norville) to after I die. (These kids will make out like bandits upon my death).

Being a young, first time Godmom I still have a lot to learn. Thank goodness I joined the Moms of Beverly Facebook Group to network and get advice from other, more seasoned Godmoms. Us moms need to stick together and support one another! Being a Godmother is a huge responsibility but I am more than happy to take on this new role! Spinster Aunt Kath has lots to teach her nieces and nephews!

Baby Michael in the middle posing as if he’s on the cover of GQ Magazine. They have Grandma Kelly’s eyes and Grandpa Kelly’s hairline. 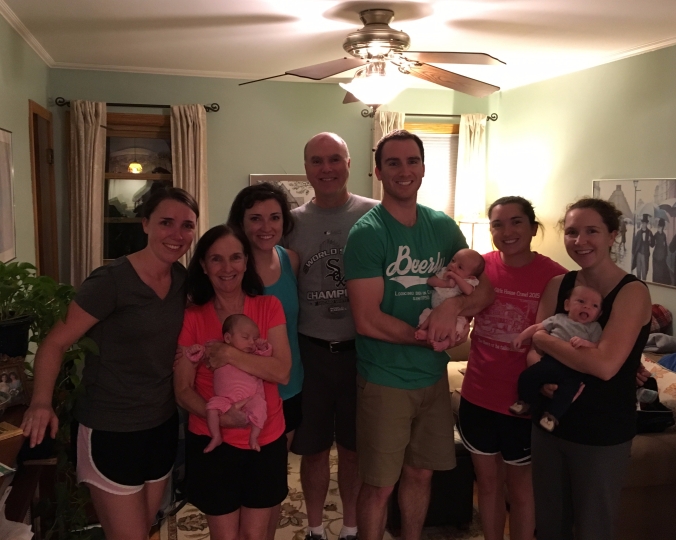 The original Kelly crew plus the ceiling fan with all the babies. (Thought I should post a photo with Prague Jane in it so she didn’t feel left out).

2 thoughts on “The Journey to (God)Motherhood”