A couple of weeks ago, I stopped at my parents’ house to help my Mom put away all the Christmas decorations because even though I moved out, I continue to be the backbone of the household. I honestly don’t think there is anything more depressing and exhausting than putting away Christmas decorations. I thought making Christmas cookies was terrible. Well, that task is a walk in the park compared to the chore of packing up all that Christmas spirit come January. As a stood in the Dining Room wrapping up the Christmas trinkets and Knick-knacks in newspaper, watching my hands turn black from all the newspaper ink, I started laughing about how tacky and ridiculous some of our old Christmas decorations are. Most of them are about 30 year-old homemade projects that we made in preschool that we continue to hang up every Christmas.

One of Jane’s masterpieces I like to call “receding hairline” angel. Nothing says “Christmas time” quite like this angel with the creepy grin, who looks like it’s flying around on the prowl to kidnap some children. 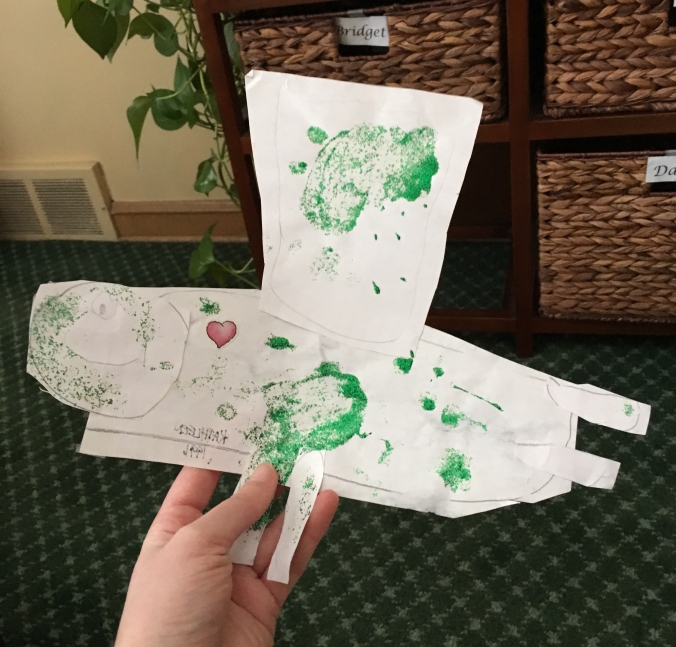 I made this one. I probably could have done a better job distributing the green glitter but IT’S CALLED ART OK YOU GUYS!

Every January we try to purge and get rid of some of these decorations, but we never do because someone always seems to have an emotional attachment to something.  For the past decade my oldest sister Maggie has been trying to throw out the Frosty the Snowman Candle but her four siblings will have none of it. I remember the first time she tried to put him in the garbage, chaos and outrage ensued throughout the house. Frosty sparked quite the argument. I thought I even heard one of my siblings yell “crucify her” from another part of the house. Yes, things got heated but Frosty stayed cool through the whole thing and Maggie lost the battle. Plus, Frosty the Snowman is my Dad’s favorite song, we couldn’t POSSIBLY get rid of Frosty! Frosty taunting Maggie with that big smirk on its face, knowing it will be able to enjoy at least one more Christmas.

Another time someone suggested we get rid of the “Red Ball” Christmas candle but that idea was quickly nicked due to its involvement in “Kathleen’s Candle tossing incident of 2002.” What was this incident you ask? Well, I was bored one school night and decided to make up a game where I repeatedly threw that red ball candle as high in the air in the living room as I could without it touching the ceiling. (Not to brag but I was pretty good at the game until I got too cocky). On one of my final tosses I wanted to see just how close I could get to the ceiling without actually hitting it. Well, turns out I am A LOT stronger than I may look because I threw it just a little too hard and a lot too high, hitting the living room ceiling and leaving a big, bright red mark on it. I immediately panicked because I knew my parents could be home at any moment so I stacked a bunch of dining room chairs on top of each other and attempted to scrub the red mark off the ceiling but it was not coming off. Mike Sr. and Mo Money were not too happy when they came home and saw the mark. But really, I still feel like the whole thing was kind of their fault because they were the ones who made up the rule that we could not watch TV on school nights. Had I been watching TV like all the other kids in America, maybe I wouldn’t have been tossing a candle around. Mike Sr. ended up having to repaint the entire ceiling so now the mark is gone, but my siblings like to hold on to the candle as a reminder of how dumb I was as a child.

My sister Bridget texted me this in early December. 17 years later and I’m still getting made fun of about the red ball candle incident.

The older I get, the more of an appreciation I have for all parents at Christmas time and all the effort they put in to making sure their kids have a happy, memorable Christmas. I remember one Christmas my Mom decided to be an ambitious Santa and she made all five of her kids one of those fleece-tie blankets. We came down the stairs Christmas morning and there under the tree were five blankets, a different pattern for each of us marked with our names. We started to run towards them to see which blanket was ours. “Careful kids,” My Mom casually cautioned from the couch as she sipped her coffee in her robe, still looking a little sleepy. “I’m pretty sure I left sewing needles in a few of those blankets so be sure to CHECK FOR NEEDLES before you use your blanket. I started to check last night but then was just too tired so I thought ‘forget it’ so it’s YOUR RESPONSIBILITY to check for needles before you decide to use your blanket or put it on your bed.” Just recently we were talking about this great gift but I think it sparked PTSD in my mom. “Ugh! I am NEVER doing THAT again!” My Mom said with disgust. “I don’t know what I was thinking! I was working on those darn blankets until about 3 in the morning and then you kids woke us up to open presents around 6! That was terrible!”

Santa, I think, got a little tired over the years. Being the fourth of the five kids I began to see Santa’s steady decline in energy and enthusiasm in his response to our letters. Every year we would leave Santa some milk and cookies on the table near the tree and a note with lots of questions. In the beginning Santa answered all our questions, but towards the end there Santa got a little short with his responses. I remember writing out a long letter with some of my siblings to Santa, asking numerous and detailed questions. When we woke up Christmas morning, Santa did leave us a letter in response, but all it said was “Dear Kelly Kids, to answer your questions, I use Magic. -Santa” He also ignored my gift requests. Every year I asked for a go-cart, Moon boots and a mini trampoline and I NEVER got them. I was a deprived child. Those moon boots would have come in handy when I was trying to scrub that candle mark off the ceiling.

By the time Jane, the fifth child, was into Christmas, believing in Santa and all that fun, Santa seemed to have no time for any magic or nonsense like that. “Wow!” Little Jane said after we had just finished opening all our presents. “Santa was really good to us this-” But before she had time to finish what she was saying my mom cut her off. “Mmmm yea,” my mom said, paying no attention to what Jane was saying. “Kids, I have the receipts to all those gifts, you are NOT going to hurt my feelings if you want to return something but if you do let me know ASAP! I am NOT spending the new year in the mall making a bunch of returns like last year! But I also DO NOT want to see any of the clothes I bought you hanging in the closet WITH THE TAG STILL ON a few months from now.” I saw Jane looking very confused wondering why our Mom would have receipts to gifts Santa brought, but then she got distracted playing with a toy and her confusion turned to happiness again.

I’m sure by the time Christmas rolled around my Mom and Dad were exhausted from all the shopping, decorating, long, boring Christmas Pageants and trying to send out a decent Christmas card. I know it was a long process trying to pick a photo that hid the fact that their five kids were lunatics. Fights always broke out when we were trying to take our Christmas card photo-Someone would hit someone, then someone would be crying, etc. Then you think you get your act together and have a good photo only to realize that someone had their eyes closed. Blinking during photos is a huge problem in our family because our baby blues/baby greens are very sensitive to the light.

Why am I in the back looking like I’m not part of the family at all but photo-bombing some other family’s picture? There was plenty of room on that step for me to squeeze in. As you can see we went with the “Turtle” theme with the turtle necks and Ninja Turtle shirt.

Kohl’s must have been having a pre-Christmas sale on khakis, or Mo had some Kohl’s cash she needed to burn.

So awkward that me, Maggie and Bridget showed up wearing THE SAME DRESS. What are the chances?! We all refused to change. 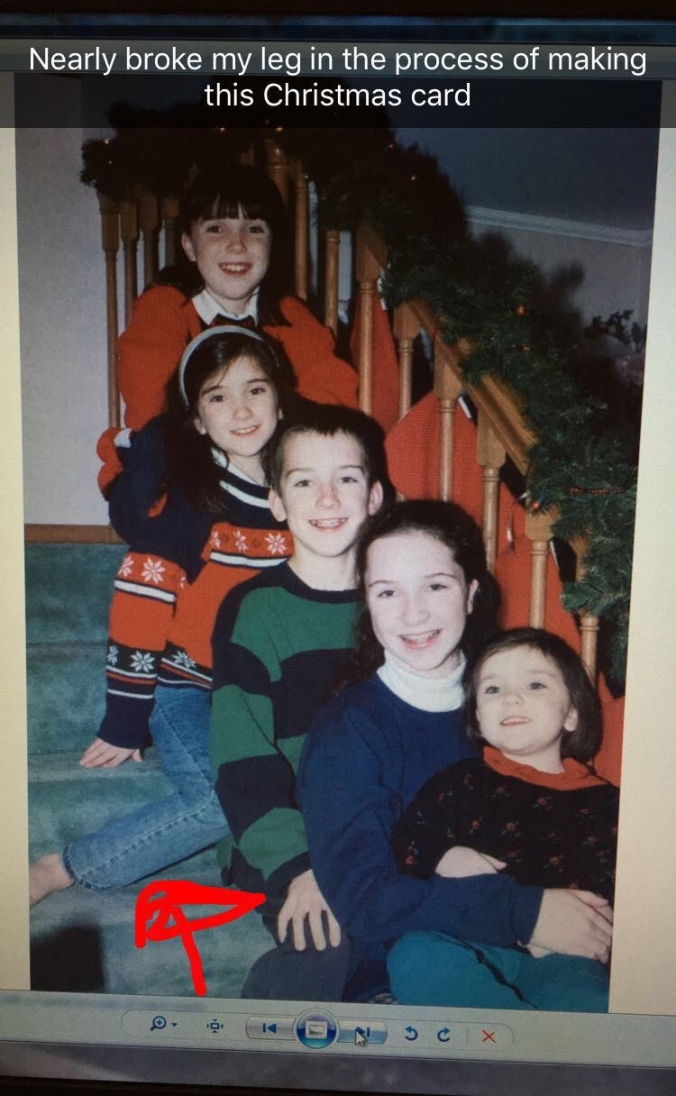 Mo was a huge fan of utilizing the stairs for the Christmas card photos, no matter how uncomfortable her children were.

I had to hold on to the railing for support after the leg injury I sustained posing for the first few takes.

Children of the corn take 1. 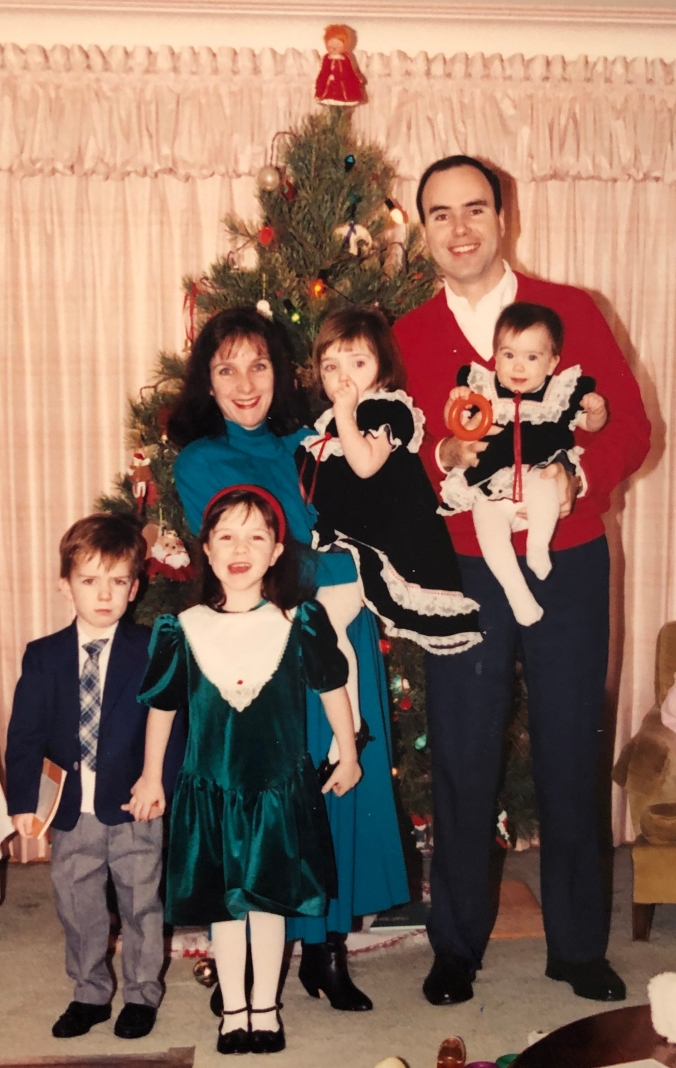 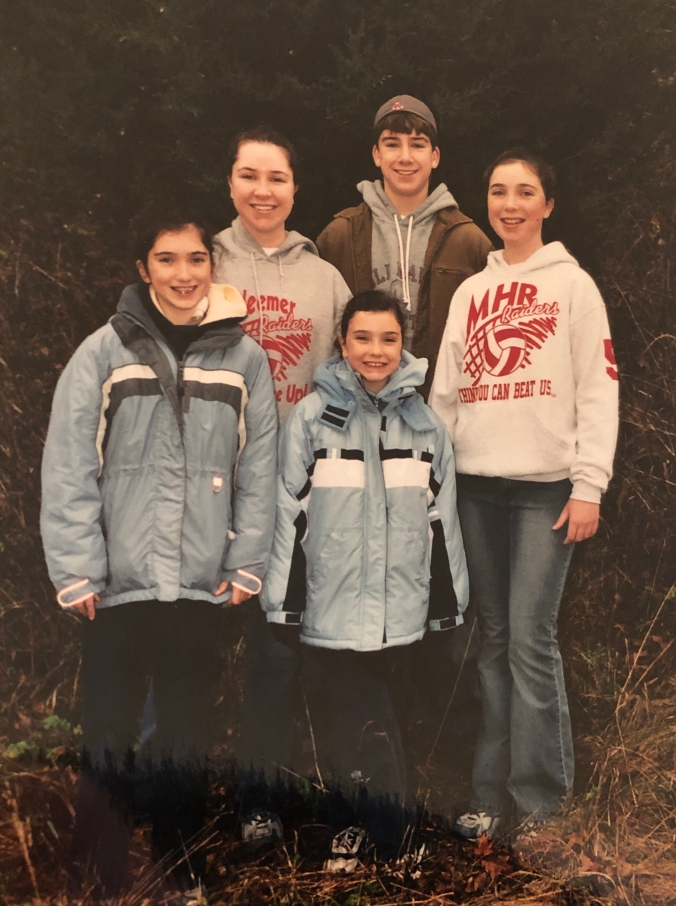 Mike and Mo must have thought, “Since our kids are at the most awkward stages of their lives, let’s take this year’s Christmas Card photo at 7am in the woods so they look awkward AND extremely tired.”

Those were happy tears Michael was crying… We swear! 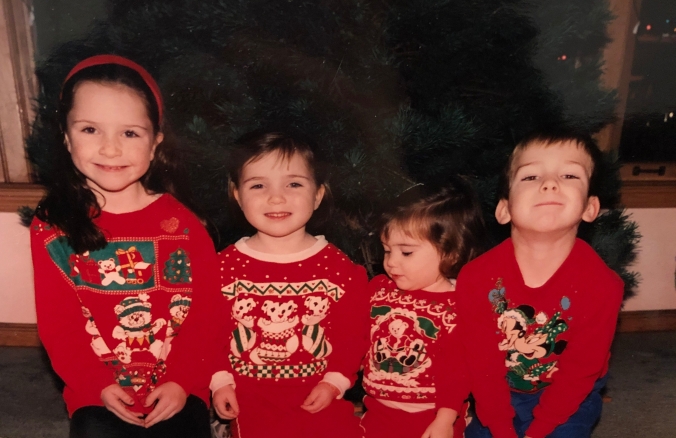 Apparently I got distracted easily. Some things never change.

So after contemplating putting some of those Christmas decorations in the donate pile, I finally just wrapped them up and put them back in our Christmas decorations box. I figure we can always decide next year if we want to get rid of anything. To outsiders our decorations may look weird and tacky (because they are) but they bring us happiness, and that’s all that really matters!

Baby Jane posing as if this was going to be on the cover of Baby Gap’s Christmas Catalog. Meanwhile I’m in the front looking like Dennis the Menace with my overalls and weird smile.

One thought on “Frosty Lives To See Another Year”