This morning while at work, I went into the ladies’ room to go “powder my nose.” As I walked into my usual stall (Second from the back, private but not as suspiciously private as the very back stall) to my delight the toilet water was still blue from the toilet cleaner. Ahh yes, there is no better feeling than knowing your ass will be the first of the day to sit on a freshly cleaned toilet. These are the simple pleasures that help me get through a day at work. That and knowing that I can get a pop for just 25 cents from the vending machine in the kitchen. Talk about a steal! What is this 1950?! You don’t see deals like that a lot these days. Coke and Pepsi products too!
Besides these small things, whenever I start to have a bad day, I think back to the summer job I had going into my Junior year of college. Ladies and Gentleman, prepare yourselves, because I am about to tell you about my trip to Hell and back.
It all started off innocent enough. I had applied for jobs at many places and never got a call back. In desperation, I sent in an application to the village hall, thinking maybe I could work there doing some filing or secretarial stuff. A few days later I got a call asking if I would like a job watering flowers for the village. I thought I had hit the jackpot.I don’t mean to toot my own horn but I have always thought I had a bit of a green thumb (wink) so this was right up my ally and It would be so easy! Plus I probably wouldn’t have to work if it was a rainy day since Mother Nature and I were basically coworkers right? WRONG. IT WAS ALL LIES. I didn’t water a single flower that summer. Instead of being the village flower girl, I became, on most days, the village garbage girl, picking up trash all around town. On the other days I was the village weed girl. Forget about climbing the corporate ladder, I was walking the path down to Hell. A path filled with weeds and garbage.
When I reported for work the first day I had no idea what I was in for. I’ll admit I was a little confused when they told me to put on a neon vest and handed me a stick and a bucket to pick up trash. I remember thinking to myself “Umm like where is my watering can? And why are you telling me to put on this bright neon vest? A decorative apron and visor maybe, possibly even a cute little belt to hold all my gardening tools but a neon vest?! What is going on…” Then they handed me the keys to a pick up truck and told me to walk along the street and pick up trash. I was a little shocked but I went. And I picked up garbage along the street all day. At first I thought it was just a fluke. They just didn’t have any flowers for me to water that day. And really, my first day on the job wasn’t that bad. I helped a blind man to the bus stop-rewarding, a crazy man with a big smile on his face shook my hand and told me over and over how it was so nice to see me again and that it had been too long-ego boosting, and I got to drive a truck-thrilling.

Oh how young and naive I was.

On the second day of my job, I weeded. All. Day. And so, that was how the weeks went by, Monday, Wednesday and Friday I bopped around with my grabber stick and bucket picking up garbage along bustling 95th Street, where cars honked at me and people asked what crime I committed that was so bad that I had to pick up trash. Then Tuesdays and Thursdays I weeded until there was not a weed in sight. Then at noon I would go back to the Public Works Garage and eat my lunch with a bunch of 50 year old men. Conversation was hard to come by but they were nice, I even got special treatment since I was the only girl besides the older receptionist. For example, one day Lou went to Boston Market for lunch and brought back brownies for the group. Before placing them down on the table he said, “Everyone gets one brownie, but Kathleen gets two brownies” and then he gave me a wink. They also wouldn’t swear around me. At lunch when one of the guys accidentally let out a swear word another would hit him on the back of the head and say “Hey no cussing in front of the lady!” and point to me…even though the receptionist ate lunch with us too. 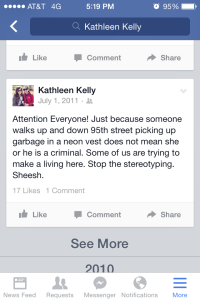 As you can see, I used social media as an outlet for my frustration.

On one particular Thursday I ran out of weeding to do quite early in the day. So I drove Lil’ 38 back to the public works base to find my boss and get a new assignment.(My truck number was 38 and she was the smallest of the pick up trucks so I began to affectionately call her Lil 38) When I arrived at the garage my boss was not there. One of the guys saw me and asked what I needed, probably thinking I was some little girl who wandered away from her babysitter. I told him and he said he would call the big boss. As I was standing about three feet away from this man he got on his phone and said “Hey Joe, it’s Mike, you got anything for ‘Weed Girl’ today?” I couldn’t believe my ears. Weed Girl?! Like I have a name, MIKE. You could have just asked me. Is that what I am to these men?! JUST a weed girl?! I pick up garbage all day too! Someone has to keep this place tidy! 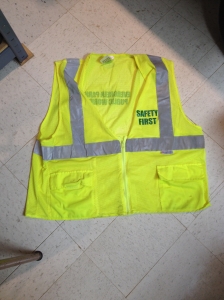 Here lies my work uniform. If you look closely you can still see the stains from my blood, sweat and tears.  It is now in it’s final resting place-the Halloween Costume Box in the basement-in case anyone want to dress up as a criminal doing community service.

And keep it tidy I did. When I worked there the town was spotless. Not a Dandelion or a gum wrapper in the street to be found. I also got in great shape-losing 2.5 pounds in the first week alone. I mean I could have created a trendy new weight lost program-picking up garbage along the street. Think about it, with the current obesity epidemic, this earth could be pollution free in days! Aaannndd I just solved two of the world’s problems. Check and check.
That summer job in Hell was definitely one to remember. But at least I got to go back to heaven when it was over, and by heaven, of course I mean college. Now that college is over I guess I’ll just have to rely on the blue toilet water to keep me going!