Prince William and Kate better step aside, because I am pretty sure I attended the wedding of the century this past weekend when my brother married his beautiful wife in Cleveland. The wedding weekend started off on a bit of a rocky start though. My parents, sister Bridget and I intended to leave at 6 in the morning on Friday while the rest of the family left a few hours later, but we were running late. Then we had to stop at the bakery to pick up a dessert for the rehearsal dinner and our cupcakes weren’t ready! Clearly the bakery workers do not know our family because if they did they would know that NO ONE messes with the Kelly family and their baked goods. After waiting about 20 minutes we finally got our cupcakes (we already had our cookies in the car) and got on the road. The ride from Chicago to Cleveland is usually about 5 hours, but since we had to stop about 15 times to feed my father’s Diet Coke addiction, it took us a little longer. Plus, he drives incredibly slow. I love the guy to death, but I’m pretty sure I saw a snail pass us on the highway. Fortunately, we spotted the golden arches in the distance (McDonald’s) – it was like seeing a rainbow after a horrific thunderstorm – and stopped there for lunch. I took the liberty of ordering two large fries instead of one large and one medium for the group. My Dad thought this would be too much but we ate them all, so I’m going to go ahead and take credit for the one bright spot in the awful traveling experience.

Once we arrived at our hotel we hurried to get ready for the rehearsal at the church and then to the dinner. The cupcakes and cookies at the rehearsal dinner were displayed beautifully. My intention was to have both a cookie and cupcake, but my plans were crushed. I am not as wise as my older sister, Bridget, who noticed the cupcake to cookie ratio right away and thus, altered her plan of attack. I first ate a cupcake and then when I went back for round 2 -my cookie – they were all gone. I was visibly upset and went back to my table to be consoled by my sisters:

Me: Gosh darn it I didn’t get a cookie!

Bridget: Yeah, that’s because you didn’t strategize as well as I did, dummy. You see, there were only 12 Mrs. Field’s cookies, but 48 cupcakes. I noticed the cookies were going very fast so I grabbed a cookie and later will go back for a cupcake

Boy was she smart to do that. We had so many cupcakes left over, and since we can’t let any dessert go to waste, we forced ourselves to eat them. I think I was averaging 6 cupcakes a day by the end of the weekend. Obviously I had 2 for Breakfast since they are just like a donut. The others I had to squeeze in between meals.

Saturday was another early morning because our appointments to get our hair and makeup done started at 7:45 am. We were also late for that due to my younger sister Jane having to run back up to our hotel room to get a water bottle. You see, I grabbed myself 2 water bottles because I know the importance of hydration and she selfishly thought one of them was for her. Typical youngest child if you ask me. I’m a middle child, survival of the fittest is my motto so I’m always prepared and never share. But we made our appointments and my mom and sisters looked beautiful. I looked stunning.

A couple of hours, and a few cupcakes later, it was time for the ceremony where I was finally able to fulfill my prophecy of reciting the cliche wedding reading of Corthinians 12:31-13, “Love is patient, love is kind.” And wow did I put on quite the show. My adjustment of the microphone, my dramatic pause for emphasis before I said the ending line of “love never fails.” I’m actually getting choked up just thinking about it.  I feel I truly had my audience on the edge of their seats wondering what love really  is with every word I said.

After the ceremony concluded we took a few pictures (Get ready for the Kelly family Christmas card 2014) and headed for the reception, which was a blast. My sister and I were lucky enough to capture this beautiful moment of our mother and brother during the Mother Son Dance. Obviously we were very emotional.

We spend most of Sunday counting the amount of likes we got on Facebook.  I’m happy to report we reached our goal of 70 likes. Thanks everyone! Couldn’t have done it without you!

But unfortunately, unlike love, good times must come to an end. And before we knew it we were leaving Cleveland to go home. We didn’t leave empty handed though, No. As if 30 leftover cupcakes weren’t enough for our fat ass family, we also took home a box of leftover wedding cake. I really wish I was kidding, but I’m not. 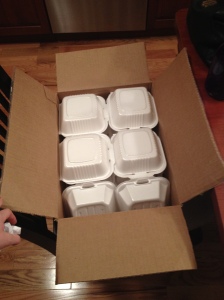 Individually wrapped pieces of cake-perfect for breakfast on the go.

As we drove through Indiana, the Sunday Blues started to set in. Luckily we all took Monday off from work, and since not working is one of my favorite things to do, my Sunday blues were kept to a minimum. That is until we stopped at Burger King. Now as anyone who has driven from Chicago to Cleveland will know, there are not many places to stop and eat. You have very limited choices. Burger King was really our only option. I can feel you all judging us so stop it! I am not a fan of Burger King because every time I go I have a bad experience. The King and I have somewhat of an abusive relationship; each time I go he does me wrong, and yet I keep crawling back in desperation. I say it will be the last time but it never is, the evil demon I call hunger gets the best of me time and time again. There was a KFC right next door but for some reason it was ridiculously expense. I love KFC, but I wasn’t going to let Colonel Sanders pull one over on me like that. After eating my burger patty between two stale buns, my cold fries and sub-par fountain Diet Coke, I was really regretting my choice. 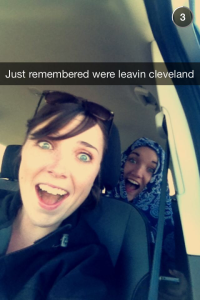 This was taken pre-Burger King, obviously.

Sunday was a bitter sweet day. We were sad that the wedding was over, but thrilled that our “Fit for 14” diets were finally over. Those last couple of days were really hard, if I wasn’t so committed to our “Fit for 14” pledge I might have had 7 cupcakes the day before the wedding instead of 6. It was all worth it though for an amazing weekend. Cheers to the bride and groom! One boy down, four old maids to go in the Kelly family!